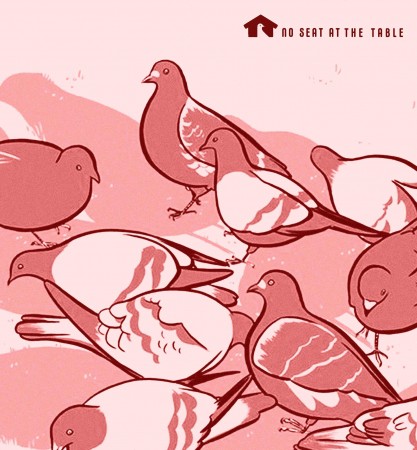 "No Seat At The Table", awarded by Stimuleringsfonds Creatieve Industrie and supported by the NIT, is a graphic novel project dealing with one of the most poignant problems of our current cities. The project involves the collection and illustration of human stories regarding residential displacement in the course of urban transformation in Amsterdam, Utrecht, Istanbul, and Ankara.

Through creating connections in these cities and producing a graphic novel on common social problems, the project aims at contributing to the public conversation and inter-cultural dialogue on the issues of urban inequality, inclusivity, and liveability in Turkey and the Netherlands. To learn more about the project, you may visit here.

The public talk, which is the third event of the "Meetings on Diversity and the Livable City" that the NIT co-organizes with the Netherlands Consulate General in Istanbul, will include talks by Minem Sezgin (project coordinator) and Rajab Eryiğit (illustrator) discussing the outline of their project and its outputs so far.

The event language will be English and Turkish. No registration is required.

Minem Sezgin is the founder, scriptwriter and photographer of No Seat At The Table. She is a self-taught (visual) storyteller and social innovator.

Rajab Eryiğit is an illustrator based in Istanbul and he currently works in the No Seat At The Table project collecting stories for and illustrating its Istanbul section.