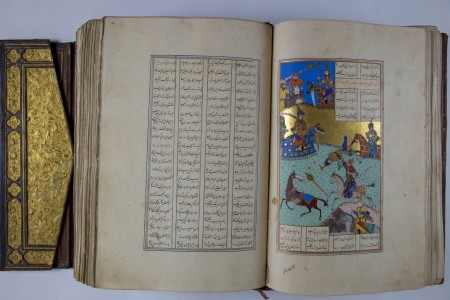 Image: Folio of "Rustam lifting Afrasiab from the saddle" from a Shāhnāma manuscript (H.1488) in the Topkapi Palace Library. Painted in Bukhara 1564, gifted to Sultan Murad III in 1594.

This online lecture titled "From the Khān to the Sultān: the Shaybānid Shāhnāma in the Topkapi (mss. H.1488) and Gift Exchange between Central Asia and the Ottoman Empire" will focus on an isolated copy of Firdausī’s Shāhnāma, a work of Persian poetry chronicling history and legends, that is located today in the Topkapi library (H.1488). It was originally produced in Bukhara in 1564/65 and was gifted in 1594 by the Shaybānid ruler ʿAbdallāh Khan Uzbek to the Ottoman Sultan Murād III. Presented in Istanbul by an embassy arriving from Bukhara, this paper will discuss both the art and politics at play in this offering. It will also present an overview of Shāhnāma productions from Shaybānid workshops that span the 16th century. By isolating copies of this one title and dwelling on the Topkapi copy (H.1488) in particular, I aim to show that interactions across the Ottoman realm and Transoxiana in the early modern period are richer than we have previously thought.

Jaimee Comstock-Skipp is a Ph.D. candidate affiliated with Leiden University working on a dissertation related to Shaybānid productions of Firdausī’s Shāhnāma epic from sixteenth to seventeenth-century Central Asia. She received MA degrees from The Courtauld Institute of Art in London (2015) and the Williams College Graduate Program in the History of Art (2012). Her BA in Islamic Civilizations and Near Eastern Studies was obtained from the University of California, Berkeley (2009). She was an NIT fellow in 2018 and has visited the NIT several times since then while working on her dissertation project.