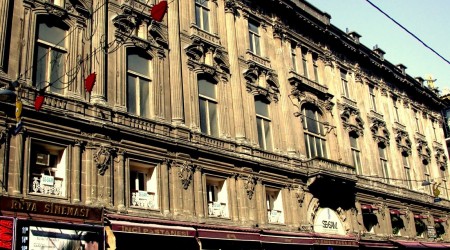 In this lecture Enno Massen presents a preliminary discussion of the conflict between discursive representations of Istanbul’s central urban district, from the 1950s until the 1990s and the historical trajectories of three social clubs in that period. In the construction of Istanbul’s urban identity, Beyoğlu holds a central role as the marker of what is often represented as the city’s historical cosmopolitanism. The district, however, witnessed a drastic transformation of its demography due to nationalist policies during the early years of the Turkish Republic and the exodus of the former non-Muslim Ottoman communities, with major flows of people moving out of Beyoğlu until the 1970s. In this lecture he aims to problematize the understanding of Beyoğlu as a place which underwent a transformation from a cosmopolitan, upper class urban district to an ethnically Turkish, religiously Muslim, and socio-economically degraded area. To this end, he examines the presence of three social clubs, the Italian Società Operaia Italiana di Mutuo Soccorso a Istanbul, the Cercle d’Orient and the Grand Lodge of Free and Accepted Masons, that were part of the former ‘Pera community’ and, in varying ways, sustain their presence in Beyoğlu into the second half of the twentieth century.