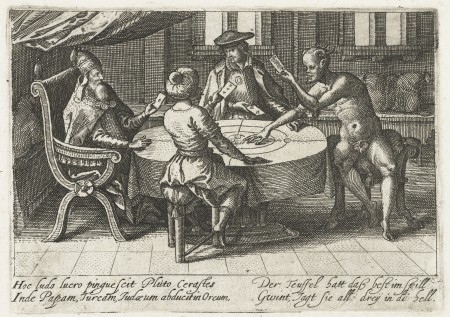 In November 2019, Ömer Fatih Parlak gave a lecture at the NIT on the decline of the appearance of Turks and Turkey in historic board games produced in Europe beginning with the 19th century. This coming lecture complements the November lecture by looking at earlier periods of the deployment of the image of the Turk.

This lecture is a counterargument to a widely accepted “terrible Turk” image that is found ubiquitously in mainstream scholarship. Underestimating the propagandist nature of these images, the Turk in European mindset is thought to represent many sorts of terrible things. This lecture, however, aims to demonstrate that the Turk was actually a multifaceted image that did not always mean the enemy, terrible or barbaric. On the contrary, in light of early modern board games and playing cards (1500-1750) we will see that the Turk was sometimes a friend, a companion in war, or an important figure to win a game. In the symbolic world of games, there might even be ahistorical confrontations in which Turks fight against Native Americans. With such a wide range of representations of the Turk, the world of historic games provides sufficient inventory for a reappraisal of scholarly theses that claim the historic image of the Turk has been “uniform, constant, and consistent.” It is hoped with this lecture that this one-sided perspective is balanced via historical examples that come in different forms of entertaining games.

Ömer Fatih Parlak obtained his doctoral degree in September 2019 in the program of Comparative Literature and Literary Theories at the Universitat Autónoma de Barcelona. He is a member of the International Society of Board Game Studies (BGS), Gesellschaft für Turkologie, Osmanistik und Türkeiforschung (GTOT) and Renaissance Society of America (RSA). He organized a colloquium for the BGS in May 2019 and he has been an editor in training for the Journal of Board Game Studies. Prior to his Ph.D., he studied English Literature and Humanities at the Eastern Mediterranean University.