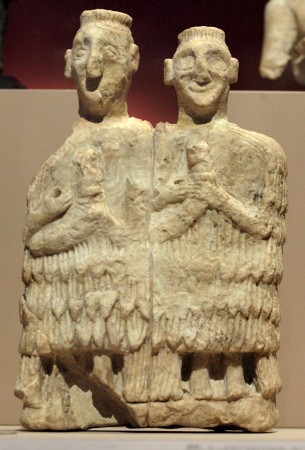 Image: Couple of musicians. Alabaster statuette Mari, temple of Inanna, chamber of the priests. Sumer 2450 BC, Museum of the Louvre AO 17568. Wikipedia.

This lecture entitled "Cultural and Religious Interactions in the Ancient Mediterranean: The Case of the Priests of Mesopotamian Ištar and the Anatolian Mother Goddess" will be held online on October 15, 2020 (Thursday) between 7 pm and 8:30 pm, Istanbul time.

Abstract
We all love a good story. The urge to hear stories and recount them to others is part of our DNA. In every period of history, wherever humans lived, stories spread from village to village, and eventually from culture to culture. Do religious practices travel too? Unlike stories, religious practices tend to remain unchanged from generation upon generation. The risk of angering the deity by not worshipping it precisely as dictated by tradition is too great. Due to this conservative nature, religions are generally not very open to outward influences. At the same time, research has shown that many religious practices throughout the world exhibit similar features. In areas where we see close cultural contacts, borrowing or influence in fact become plausible explanations for religious parallels. This is certainly the case for the parallels we see between the religious practices of ancient Mediterranean and Near Eastern cultures in the Late Bronze and Iron Ages. In this lecture, the striking parallels between the cults of the Mesopotamian goddess Ištar and the Anatolian Mother goddess will be explored as an example case study. The priests of these goddesses performed ecstatic rituals and were conceived of as neither men nor women. Did the Anatolian cult borrow from the older Mesopotamian cult? And if yes, how, and why? Taking examples from the case study, I explore the challenges in making a convincing case for religious borrowings between ancient Mediterranean cultures, while at the same time offering a tentative model for doing so.

Michèle Meijer studied Classics and Art History at Vrije Universiteit Amsterdam. She also followed courses on the languages and history of ancient Near Eastern cultures, especially Mesopotamia. She is now finishing her Ph.D. project at the VU, in which she combines her background in both Classics and Ancient Near Eastern Studies in order to contribute to the field that studies cultural interactions in the ancient Mediterranean. In this lecture, she presents the first results of her PhD project, for which she wrote the final proposal during her first stay at the NIT in 2015.

To join us at this lecture, please fill out the form.