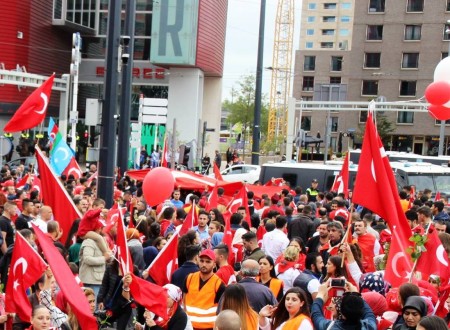 In the Netherlands there is a growing concern among policymakers on radicalizing Muslim youngsters and those who want to join Islamic State in Syria. According to the research available, the number of Dutch that headed for IS in Syria is rather limited and they are mainly characterized by their ethnic Moroccan background. Research done by FORUM, which was a Dutch institution on multicultural issues, among youngsters with a Moroccan and Turkish background with respect to their attitudes towards the conflict in Syria that was published in November 2014, revealed however that it were especially the Turkish-Dutch youngsters who were very much in favor of Islamic State and their violent actions in Syria. This unexpected outcome of the so-called FORUM research led to direct and emotional reactions among politicians, as well as among the Turkish Dutch youth. The research although it was heavily criticized, also fueled the anti-Muslim sentiments in the Netherlands and prompted Dutch government to a series of actions with respect to the transparency of Turkish religious movements and the youngsters who participate in these movements.
This presentation on the feelings of belonging of the Turkish Dutch youngsters in the face of current international events is based on fieldwork among 82 Turkish Dutch youngsters with different religious and ethnic backgrounds as well as with 23 board members of divergent Turkish Islamic organizations and movements. The research not only tries to make sense of the outcomes of the FORUM research, but above all tries to answer the question on how Turkish Dutch youngsters identify with Dutch society and by what processes these identifications are being influenced.
Prof. Dr. Richard Staring holds a chair on Mobility, Control, and Crime at the Criminology department of the Erasmus School of Law (Rotterdam, the Netherlands). Trained as an anthropologist, he studies divergent aspects of irregular migration, irregular stay and migration related (organized) crimes as human smuggling and human trafficking in the context of surveillance and control policies.