An international team of geneticists, anthropologists and archaeologists have used ancient genomes to study people whose burials are associated with some of the earliest houses in history, some 10,000-8,000 years ago in Anatolia. The data includes genomes from Barcın Höyük, a site excavated by the Netherlands Institute in Turkey, and three other Neolithic sites. 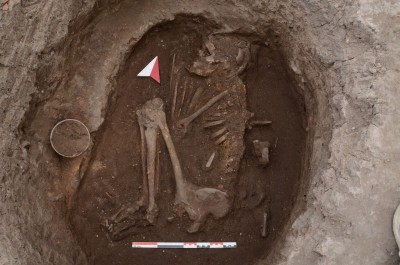 In some villages, houses were used for burials of biological family members. But in other communities, many children and babies with no apparent biological kinship were buried within the same buildings. The results, published today in Current Biology, emphasize the remarkable diversity of kinship types in ancient human societies.

Middle Easterners, the first villagers in history with a sedentary lifestyle, not only built houses, but also buried their dead, young and old, within and around these buildings, while continuing to live in them. Although this subfloor burial tradition is well-known, the underlying social relations among these co-burials have remained a mystery. Many assumed these burials were biological family members, while others suggested that households and their burials represented more complex social groupings with non-biological forms of kinship. The current study shows that both biological and non-biological forms of kinship were represented in Neolithic settlements.

Archaeologist and Netherlands Institute in Turkey Director Fokke Gerritsen participated in an international team of 57 scientists from 11 countries that studied genomes from dozens of skeletons excavated from Neolithic Anatolian villages. The team produced 22 new genomes from Aşıklı Höyük and Çatalhöyük and combined this with 37 published genomes from other Anatolian sites, including Barcın Höyük. The researchers then assessed biological relationships among burials excavated in the same or neighboring buildings.

In the earliest villages studied, Aşıklı Höyük and Boncuklu Höyük (about 10,000 years ago), co-buried individuals frequently included siblings and parent-offspring pairs. This confirms the notion that early Neolithic societies were organized, at least partly, around biological family ties. Still, not all co-buried individuals were relatives. A perinatal baby in Boncuklu buried together with a woman with whom she had no biological connection, struck the team as particularly instructive.

A role for social kinship in Neolithic communities

A more surprising result was found in two of the later villages, Çatalhöyük and Barcın, from the time when villages grew in size and farming was well-established, about 8,500 years ago.

In both sites, the researchers successfully obtained DNA mainly from burials of children, infants, and babies. Intriguingly, in buildings with large numbers of such sub-adult burials, biological relationships were markedly rare. There was no evidence for these children being members of biological families, nor of extended families. The team note that in Çatalhöyük, Barcın, and possibly other Neolithic communities, social organization may not have been based simply on biological relatedness. Neolithic people were buried in buildings not with their biological kin, but with their social kin.

Fokke Gerritsen explains the importance of the study for the understanding of the Neolithic community that lived at Barcın Höyük: “We found several clusters of infant burials under house floors, whereas adults were generally buried in the courtyards between the houses. Our assumption until now had been that babies and infants were buried within the house of their parents. But the rarity of first-degree siblings among these clusters indicates otherwise. This makes us rethink not only the variety of kinship traditions that were present in a Neolithic community, but also the connections between people and the houses they inhabited.”

The article is published open access, and can be found by following this link