Ketty Iannantuono (Radboud University, Nijmegen), recipient of the NIT&RMO fellowship, is currently working at the NIT on her PhD-project on the communication of power dynamics through the set-up of Roman monumental landscapes. 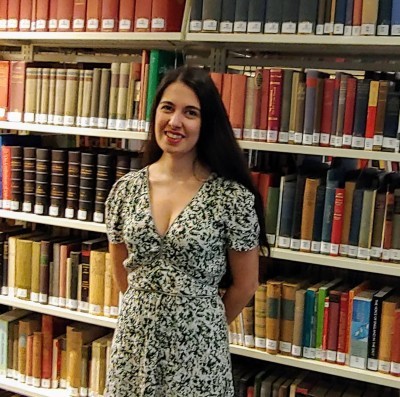 Ketty is a PhD-candidate at the Department of History, Art History & Classics of Radboud University, Nijmegen. As part of the VICI project Constraints and Tradition: Roman Power in Changing Societies (50 BCE – 565 CE), her research investigates imperial representations as expressed by monuments erected in the far-flung regions of the Roman Empire. The project seeks to explore the constraining role of local customs and circumstances in the formulation and reception(s) of political messages conveyed by Roman monuments.

Central stakeholders of leadership and embodied tokens of prestige, Roman emperors were often staged on monuments broadcasting public statements concerned with status, power balances, beliefs, and interests. The fragmentary state in which Roman monuments have often come down to us, however, represents a challenge for a successful reconstruction of such messages. Over time, moreover, reliefs, inscriptions, and statues belonging to these sculpted memorials have been frequently de-touched from their original settings to enter the collections of eager Ottoman and European aristocracies, artistic workshops and museums. Far from being neutral strategies of conservation, these collections rather reflected visions of the Roman society filtered by local and contemporary situations. During the heyday of imperialism and nationalism, more than ever, ancient objects literally retrieved from the ancient ground of contended territories became attractive sources of inspiration for ‘imagining’ new communities. Referring to the political system of a lasting culture spread all over the Mediterranean and far beyond, Roman monumentality, in particular, served at the same time as evidence of nationalistic pasts and legitimizing mirrors for imperialistic territorial claims. This research aims at a better understanding of the impact of these dynamics on modern interpretations of Roman monuments.

During her stay at the NIT, Ketty will look at processes of selection, acquisition, and exhibition of Roman monuments from Asia Minor in the Istanbul Archaeological Museum and in the Ephesus Archaeological Museum in Selçuk. Other museums developing in the same historical-political and academic contexts of late 19th and early 20th century Turkey and Europe will be taken into account for tracing possible different strategies linked with specific local situations. The stay at the NIT offers her the possibility to collaborate with international scholars, museum curators and directors of archaeological projects dealing with Roman Asia Minor monumentality. She will visit and study the Roman collections at different archaeological museums, as well as various archaeological sites in Istanbul and Turkey, in order to experience monuments in situ and as displayed in modern museum settings.