Marijn Mannien (Leiden University) is currently at the NIT working on his MA project on the Galatian fortifications of Central Anatolia. 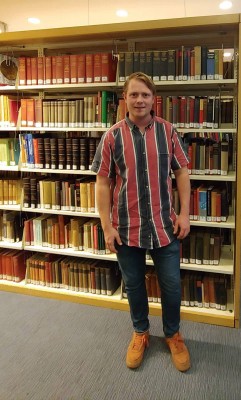 Marijn Mannien is a master’s student at Leiden University, Faculty of Archaeology. He is studying 'Global Archaeology' with a focus on the Classical Mediterranean world and Prehistory of Europe. At the NIT, he will conduct his research about the Galatian fortifications of Central Anatolia.

The Galatians – various Western European tribal groups that migrated into Asia minor from around 281 BCE onwards – maintained many aspects of their previous ‘Celtic’ culture but were also part of the greater process of Hellenisation or Hellenism that took place all over Eurasia. Eventually, during the later Hellenistic period, the Galatians started to build stone fortifications. Nonetheless, the material stylistics of these fortifications are in current scholarship linked to one specific cultural identity. They are labelled as something ‘Greek’ or ‘Celtic’ while other local and global influences are disregarded. Therefore, this research will re-asses the Galatian fortifications using a framework that excludes ‘labelling’ and emphasizes on both local and global aspects. It will interrelate the local fortifications with the global Hellenistic-Roman context. Marijn hopes to establish a paradigm shift in which Galatians will be seen as part of the highly connected ancient Eurasian world and not as the barbarous warlike migrants from ‘Celtic’ Europe.

Throughout his stay at the NIT, Marijn will do both literature research and field visits. The sites he is planning to visit are Tabanlioğlu Kale (Peium), Karalar (Blucium or Leceium), and Zengibar Kale (Isaura). During these visits, he will observe the fortifications on-site. Hereafter, the collected data in combination with literature will be used to re-analyse the sites during the rest of his stay at the NIT.