Robert Feller of the University of Groningen is currently at NIT for his research "Connecting Thrace – Cross-border cooperation in the Bulgarian-Turkish border region". 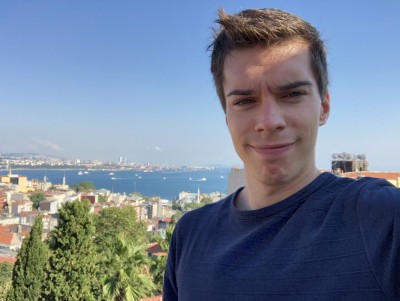 Robert Feller, a master student at the University of Groningen is currently a NIT Research Fellow working on the research: “Connecting Thrace – Cross-border cooperation in the Bulgarian-Turkish border region”. In the region of Thrace, which is nowadays divided between Bulgaria, Greece and Turkey, a broad spectrum of peoples lived together within the confines of the Ottoman Empire for many centuries. Following the rise of nationalism, several wars and (forced) migrations, not only were the people in this region divided by national borders, but also by “boundaries”, meaning: borders that are located in the socio-spatial consciousness and collective memory of people. Evidently, opening the borders and working together in cross-border cooperation projects can have the effect of breaking down boundaries between people, but can just as well aggravate inter-ethnic conflict. Focusing on how Bulgaria and Turkey construct their national narratives, their identities and the “other”, Robert visits several cross-border projects during his three month fieldwork to research whether the people in Thrace become increasingly connected, or not.